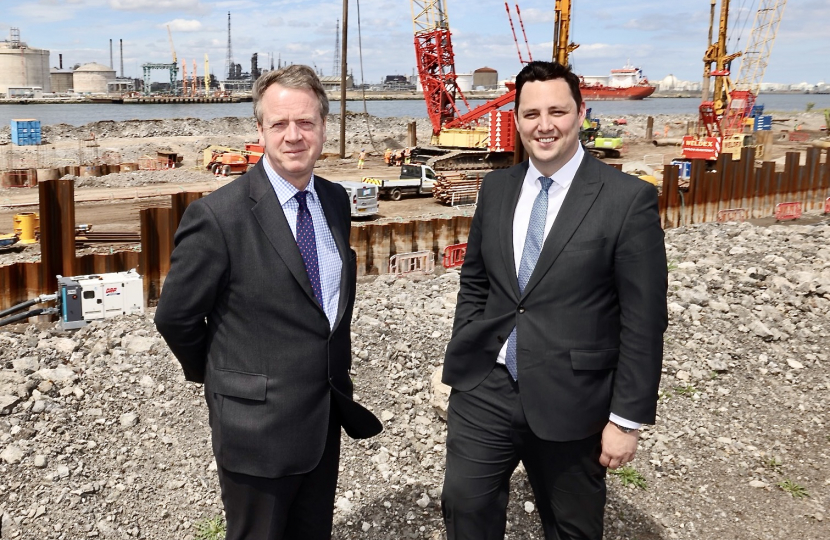 New route to a Freeport?

I was disappointed when the Labour-SNP led Dumfries and Galloway Council dropped the most recent bid to secure Green Freeport status for the Port of Cairnryan.

Making this decision after a reported £20,000 of taxpayers’ money had already been spent has perplexed some of my constituents in Wigtownshire who appreciated the potential to create economic growth, hundreds of new jobs and attract significant investment.

The freeport concept has been tried and tested successfully across the world and the UK Government model allows new and existing enterprises within up to 45 kilometres of the anchor port to apply for potentially game-changing tax and other incentives.

A selection process is underway north of the border where the UK Government is investing £52 million in partnership with the Scottish Government and where two Green Freeports will be chosen in the coming weeks from the bids, unfortunately not now including the Cairnryan proposals being co-ordinated by the local authority.

One issue in Dumfries and Galloway Council’s decision to drop the local bid is understood to be the fact P&O Ferries was a key commercial partner, a company which was a target for justified condemnation recently for the ill-judged way they dismissed 800 staff around the country via a video message.

I also strongly criticised P&O’s actions, and their executives are well aware of the backlash against them, but I believe, that as a major local ferry operator, more could have been achieved through the council engaging further with them as a route to bringing new quality jobs to Wigtownshire through a freeport.

I recently visited the Teeside Freeport at Middlesbrough where I learned first hand about the benefits to businesses and the local community that comes from the special status.

As the first in the UK, Teeside is a fantastic example of what can be achieved as a freeport: securing multi-million pound investments in renewables production to contribute to the UK's long-term energy security.

I had the chance to speak to Tees Valley Mayor Ben Houchen, who told me that in the first few months since the launch they were already receiving firm interest from companies and new job prospects for the area, attracted by the favourable economic regulations being applied.

Despite the Loch Ryan setback, I feel strongly that in the longer term there should be further efforts to designate the Cairnryan / Stranraer area as a Freeport.

I support a recent proposal, which was also mentioned on this page last week by my constituency MSP colleague Finlay Carson, for consideration to be given to a cross-channel Freeport encompassing Cairnryan / Stranraer along with Belfast Harbour / Larne.

There are significant obstacles to overcome but these sister Scottish and Northern Ireland ports fall within the freeport geographical size guidelines and there is much merit in the idea and benefits for all the communities concerned.

Highland Show popular as ever

As you read today’s Free Press I’m due to be experiencing the pleasant and interesting duty, as part of my UK ministerial work, of visiting the 2022 Royal Highland Show at Ingliston.

Returning after two years, I’m delighted, although not surprised, that demand for tickets has been extremely high for this year’s event which looks set to live up to its reputation of being at the heart of rural life and agriculture in Scotland.

Not only a showcase for the best of Scottish livestock and produce, the latest developments in science and technology relevant to our countryside are on display and it is an excellent opportunity to catch up with friends from across the country, including Wigtownshire.

It also heralds the beginning of show season in south-west Scotland and I look forward to catching up with constituents at some of our local events in the coming weeks.

Another major event this summer will be the Commonwealth Games — July 28 to August 8 — which will be hosted in Birmingham with other venues elsewhere in the Midlands and south-east.

I felt privileged yesterday to witness the 16th Queen’s Baton Relay, which celebrates and connects with countries around the Commonwealth in advance of the Games, when it arrived in Dumfries and Galloway after visiting other parts of Scotland.

It was also an opportunity to meet a number of Team Scotland athletes from a variety of sports, as well as some local future Games hopefuls, whilst witnessing the excitement and anticipation generated by the famous well-travelled baton.

After the stopover in Dumfries, the Queen’s Baton team set off for the Northern Ireland leg of their pre-Games tour.

It was only right and proper that there were ceremonies in the constituency, including Newton Stewart, to mark the 40th anniversary of the Falklands War.

Several veterans from Galloway also took part in a large national parade in Carlisle last month which was attended by Richard Hyslop, the Falklands Islands Government Representative to the United Kingdom.

As recent events internationally have shown, the importance of maintaining the strength, experience and cutting-edge flexibility of our British armed forces could not be more important.

I was also pleased to see that, during the week in which Armed Forces Day takes place, flag-raising ceremonies and parades were taking place at both Westminster and across Dumfries and Galloway, including at the Ministry of Defence training area, near Kirkcudbright.

There is great pride in Wigtownshire in our many veterans and local men and women currently serving in the armed forces.

Extra help on the way

A perfect storm, driven by factors such as the pandemic and the war in Ukraine, have contributed to what is a global supply and cost-of-living challenge.

In Dumfries and Galloway, the pressures from rising electricity and other commodity prices are clear to see with the high price of fuel a significant issue as, for many constituents, motoring is an everyday necessity rather than a luxury.

There are no easy solutions but I’m pleased a further round of UK Government support to those who most need it will be delivered from July 14.

A £37 billion UK-wide package will provide help to pay energy bills, make changes to the Universal Credit taper rate and provide the Scottish Government with funds to allow them to rebate council tax.

A number of constituents lost power for extended periods last winter as a result of the high winds during Storm Arwen.

Whilst the long-term impact on forestry with fallen trees was the most visible and left substantial gaps in woodlands, the loss of electricity posed the most immediate impact in places.

One complaint raised in parts of southern Scotland was a lack of communication about when power would be restored, making it difficult for affected consumers to plan ahead, causing inconvenience and hardship.

No-one can doubt engineers' expertise and the challenges they face from extreme weather, but I welcome official watchdog Ofgem securing assurances from the industry that they will improve systems and response, ensuring greater storm resilience.

It was disappointing to see Scottish First Minister Nicola Sturgeon again devoting so much of her time, energy and taxpayers’ money in an attempt to split up the United Kingdom.

Launching a divisive campaign for separation, during such challenging times internationally, is simply ill-judged, reckless and deeply damaging to Scotland — as it would be at any time.