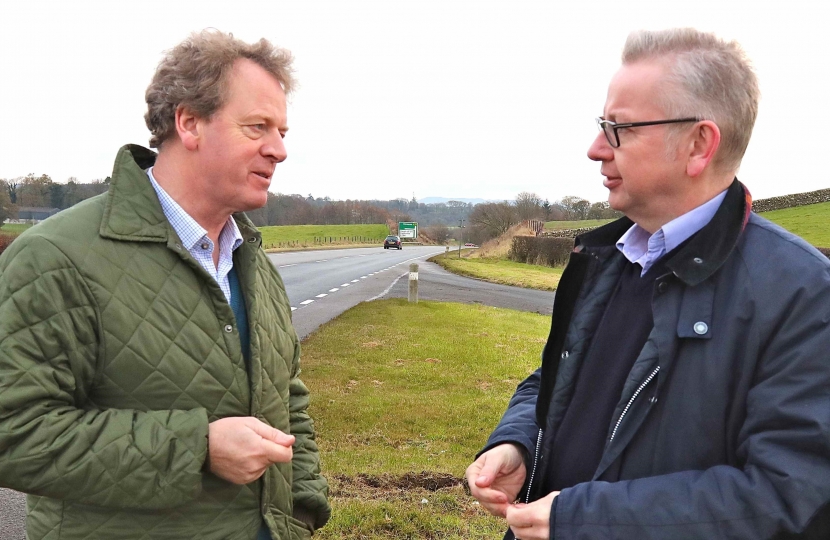 He said: "The A75 has been highlighted as one of a small number of projects across the UK recommended for immediate further investigation.

"I'm absolutely delighted that the potential of this road, in terms of better co-ordinating transport across the British Isles, is being recognised by world-leading transport experts.

"Like most local drivers, the importance the route has always been obvious to me but this development is a significant step forward in putting the A75 firmly on the UK infrastructure map.

"Many of my constituents list improvements to the the A75 -- and the A77 -- as high priorities and visitors are often bemused that such an important trunk road still goes through small villages, one with two sets of much-needed speed-triggered traffic lights.

"I now call on the SNP Scottish Government, which to date has opposed direct UK investment, to embrace the project and put aside their narrow separatist agenda by starting to co-operate in the development of detailed A75 upgrade proposals."

Mr Jack said the wider conclusions in the report would also benefit Dumfries and and Galloway by aiming to introduce significantly faster rail-links with Scotland and improving domestic UK air travel.

He was also supportive of the report's recommendation for a feasibility study into a 'fixed link' between Wigtownshire and Northern Ireland in the form of a tunnel or a bridge.

Mr Jack, who favours a tunnel concept using evolving civil engineering designs, believed further investigation was the right route forward for what, by its complex nature, would be a longer-term aspiration.

He said: "The good thing is that an improved A75 would benefit both the Cairnryan ferry traffic and any future fixed link to Northern Ireland."

Scottish Secretary pays tribute to HRH The Duke of Edinburgh

Scottish Secretary Alister Jack's statement on the death of His Royal Highness The Prince Philip, Duke of Edinburgh.

It is with great sadness that we mark the passing of Prince Philip, the Duke of Edinburgh.