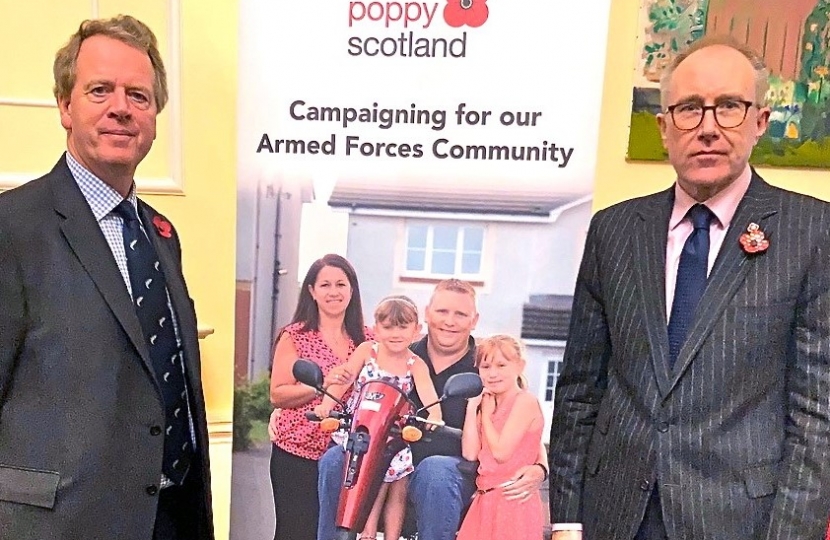 Like most people inside and outside the UK Parliament I was shocked and saddened by the recent murder of Sir David Amess.

Not only was he a popular, kind and effective long-serving MP but, rightly so, his highest priority was always the people of his Southend West constituency.

I concur with the many warm tributes made to him and was myself grateful for his shared wisdom and experience after first being elected to the House of Commons.

Understandably, a review of security was launched across all the parliaments and assemblies in the UK and I will take cognizance of the findings, not only to minimise risk to myself and my team but for constituents.

However, I firmly believe, as I’m certain would Sir David, that a vital anchor of our democratic system is that the public must have easy access to speak with their MP and I’m determined that is maintained in Dumfries and Galloway in as secure a way as possible.

On a similar theme the annual UK Parliament Week is about to take place and highlights the political process, traditions and ways the public can help influence the agenda.

I hope this special period, November 1-7, will again turn the spotlight on the Mother of Parliaments, and encourage more people to engage with the full spectrum of democracy -- from their local council, the devolved parliament and through to Westminster.

I’m delighted that a number of schools and youth organisations in Dumfries and Galloway constituency are taking part and should have received special kits, featuring a booklet, bunting, a ballot box and other learning material.

In Wigtownshire, amongst those taking part are Stranraer Academy, Belmont and Leswalt primary schools as is the GirlGuiding movement across the region. I’m also hopeful community groups and other organisations become involved.

This year, one focus of the special week is on how small actions can lead to big changes and why working with local MPs and raising issues with Ministers can be a route to addressing matters of concern.

I’m always pleased to take up issues on your behalf and I believe UK Parliament Week offers constituents of all ages the opportunity to learn more about Westminster and how public participation is the lifeblood of our democracy.

The need for global action on Climate Change has never been more evident and I’m glad the UK Government will be at the forefront of efforts to reach net zero carbon emissions.

That’s why the 12-day UN conference (COP26) beginning in Glasgow next week will be so important in trying to achieve a near worldwide commitment to limit and eventually reverse global warming.

I’ve been impressed by the community focus and special activities in Dumfries and Galloway, including school projects, a quilting group effort and an eve-of-conference event, including a flags parade, illuminated tall ship and music in the coastal village of Palnackie.

The UK Government’s offer to host the conference in Glasgow is a huge opportunity to showcase the best of Scotland and the actions of the SNP-controlled City Council and Scottish Government will be vital to ensure issues such as the level of refuse on the city streets and threat of rail strike disruption can be resolved or minimised during this period.

Looking forward to after the conference, I believe it is important to encourage businesses in Dumfries and Galloway and nationally to lookout for further opportunities that arise through the expanding green economy in the months and years to come.

I was privileged as Secretary of State to last week host in Dover House, the Whitehall base of the Scotland Office, the official launch of the 2021 Poppyscotland Appeal.

Despite obvious difficulties with fund-raising caused by the pandemic, much of the vital welfare work of the charity, carried out with Royal British Legion Scotland, has been maintained.

The value of this important role was highlighted by Poppyscotland in a video of case studies they showed at the live-streamed event in which ex-service people, some seriously injured in active service, told their stories and outlined vital assistance they received from the charity.

Covid remains a challenge for Poppyscotland by limiting fund-raising activities during the crucial coming days up to Remembrance Sunday, so I would urge readers to be proactive in making donations whether online or collection points, including in many shops.

During the Covid lockdown periods over the last two years the importance to the supply chain of our lorry drivers and transport industry has never been so widely appreciated across the UK.

In Wigtownshire, and across Dumfries and Galloway, lorries continued to use routes such as the A75 and A77 at the height of the crisis as they delivered essential supplies to our own communities and through the ferry terminals at Cairnryan.

The logistics industry transports more than 85-per-cent of goods on the move in the UK and with training being stepped up I believe hard-working lorry drivers, often working unsociable hours and in all weather, will be appreciated even more in the future.

That’s why I’m delighted to offer my support to the Road Haulage Association (RHA) in celebrating National Haulage Week which runs until Sunday.

I endorse their recruitment campaign in which they are raising awareness of the nationally important role of the transport industry and would urge all those looking for a new career to find out more about opportunities at the RHA website.

Whilst television and online video can these days offer an amazing choice (not all good), my wife Ann and I both believe there is something very special about watching a film at the cinema.

I’ve been pleased in recent years to witness a renaissance of interest in going to watch a movie on the big screen.

In particular, more advanced digital technology and funding opportunities have encouraged a revival of the cinema in smaller communities across the country to satisfy an obvious appetite.

That’s why I was delighted to be reminded that The Cinema in Newton Stewart was a pioneer in that trend when it was reopened after a major facelift almost 25 years ago and remains an appreciated community asset today.

Much credit should go to the hard-working committee, then and now, for their tireless work in keeping the vibrant cinema’s appeal and I wish them well for their planned special anniversary celebrations next February.