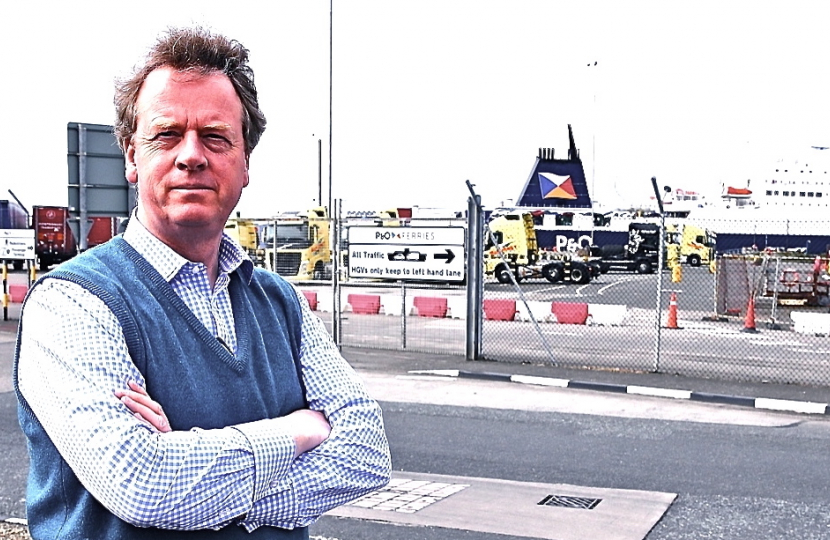 I was deeply concerned last Thursday by the announcement by P&O Ferries that they were making 800 staff redundant nationally and particularly by the manner this was carried out without any formal consultation.

This has naturally come as a blow to a significant number of my constituents who work on the company’s Cairnryan ferries and I support the Transport Secretary’s decision to examine any UK Government contracts with P&O and their parent company.

It is important that the right expert advice and support is being put in place for those employees affected during this difficult time and I understand that is happening.

Meanwhile, I have written to Peter Hebblethwaite, the P&O Ferries chief executive, seeking clarification and requesting that urgent steps are taken by the company to mitigate the impact of their action. At time of writing, I am awaiting his reply.

The Cairnryan-Larne service, operated by P&O Ferries, is an important employer in Wigtownshire and vital transport link for Scotland, Northern Ireland and the rest of the UK.

I know many individuals and companies have experienced understandable difficulties over the last two years because of the pandemic and other factors but it remains important that companies treat their employees fairly and with respect, even when businesses face extreme challenges and have to make difficult decisions.

The latest developments make it even more important that projects, such as the Stranraer waterfront and town centre regeneration, to boost the area's economy, are progressed at every level of local and national government as soon as possible.

I welcome the steps taken by Chancellor Rishi Sunkak in his Spring Statement this week to ease some of the pressure on household budgets.

The world-wide broad sweep of price rises, including groceries, general goods, materials, energy and at the fuel pumps, has caused particular hardship in lower-wage economies like south-west Scotland.

The cut, worth over £6 billion, will benefit 2.4 million working people in Scotland with a typical employee saving over £330 a year, whilst an average self-employed person will save over £250.

Most important in largely rural Dumfries and Galloway, the Chancellor also confirmed that fuel duty for petrol and diesel will be cut by 5p per litre to help drivers across the UK with rising costs. Worth £2.4 billion, this is the biggest cut ever on all fuel duty rates and means a one-car family will now save on average £100.

As a result of a cut to the basic rate of income tax for savings income, taxpayers in Scotland will see benefits worth £3 million. As other income tax rates are devolved, the Scottish Government’s funding is automatically increased as a result of this tax cut as set out in the agreed Fiscal Framework. This is initially worth £350 million in 2024-25.

The Chancellor also set out a series of measures to help businesses boost investment, innovation, and growth – including a £1,000 increase to Employment Allowance to benefit around half a million businesses.

As a result of measures in this Spring Statement the UK Government is providing the Scottish Government with an additional £45 million through the Barnett formula next year.

Reasons for the return of inflation are wide-ranging including post-Covid shortages, increased transport costs, loss of food and other farm supplies from the war in Ukraine.

Locally, I’ve been impressed by the additional support provided by that excellent organisation, Dumfries and Galloway Citizens Advice Service, targeted at local people struggling to cover their outgoings.

The organisation’s advisers work all year round but have added some additional services because of cost-of-living changes. Full details are available online at www.dagcas.org

Trained volunteers and staff are ready to offer free, confidential advice to help decreasing costs of daily living, managing debt and what benefits and other support are available.

I’ve been proud of the efforts by so many groups and individuals from Wigtownshire who donated goods and cash to help refugees fleeing the horrific Russian invasion of their homeland.

There has also been significant interest across the region from households interested in the scheme to provide refuge and temporary homes in this country.

One of the most moving speeches at the Conservative Party Conference in Aberdeen at the weekend was from Zhenya Dove, a Ukrainian living and working in Scotland.

She was fearful for the safety of her mother, father and sister who live in an area where Putin’s rockets and bombs rain down day and night.

My thoughts remain with Zhenya, her family and all those caught up in the fighting following the devastating Russian attack.

There can be little doubt that lack of progress on any meaningful upgrading of the A75 and A77 remains a significant issue for many of my constituents.

These major trunk routes have been identified as being of strategic UK importance in the Union Connectivity Review.

With this in mind I’m looking forward to travel to Northern Ireland next week to take part in roundtable discussions at Belfast Harbour with business leaders, hauliers and logistics firms.

The UK Government has pledged investment for improvements but wants to work with the, so far, less than enthusiastic Scottish Government — which has devolved responsibility for transport — to deliver projects.

People living daily with the difficulties and dangers on both roads want practical solutions — not the constantly repeated SNP-Green ‘power-grab’ mantra.

With so much disturbing news at the moment, I feel I must end this month’s Free Press column on a high note.

As someone who enjoys brass band music, I was delighted to learn that Stranraer Brass Band will have the opportunity of representing Scotland at the national finals for their section at Cheltenham later this year.