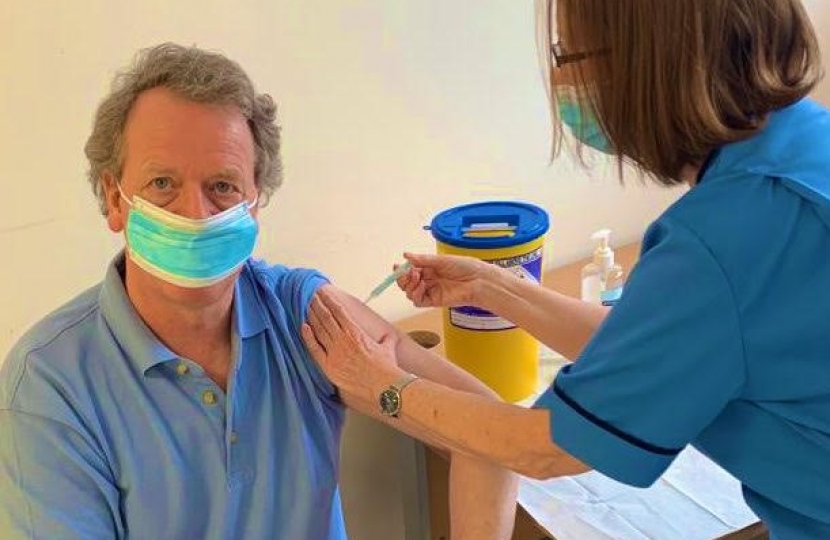 At the geographical heart of the UK, the Borderlands has a unique position straddling the Scotland / England boundary -- and westwards through to the Wigtownshire coast.

All manner of enterprises in Dumfries and Galloway rely on business from both sides of the border and many of my constituents have almost as much in common with neighbours across the Solway as with our friends in other parts of Scotland,

That's why the now familiar Borderlands Growth Deal is so important and will deliver just that -- providing more than £450 million to the area and creating 5,500 jobs.

Bringing Dumfries and Galloway, Scottish Borders, Carlisle City, Cumbria and Northumberland councils together for this project makes perfect sense for the one million Borderlands residents as we share so many economic, cultural and geographic similarities.

As the national vaccination programme drives back the coronavirus the Borderlands Growth Deal takes on a new significance and will help spearhead the post-pandemic economic recovery.

The UK Government is at the forefront investing £265 million in the area, a sum which will be added to by £85 million from the Scottish Government north of the border with the remainder coming from other partners.

Together this investment will generate an estimated £1.1 billion gross value added (GVA) to the area.

Of particular interest to Wigtownshire, will be the the contribution towards transforming Stranraer and Loch Ryan into an exciting leisure destination with the marina project, creating jobs and attracting tourists with support from the Scottish Government and the local authority.

A similar approach has been taken to projects to stimulate business growth in Newton Stewart and Castle Douglas by upgrading premises.

Reflecting the agricultural character of our region, the agreement will deliver a Dairy Nexus research centre through an £8 million state-of-the art development at Scotland’s Rural College (SRUC), near Dumfries.

Dumfries and Galloway will also benefit from the UK Government's £16.2 million investment in improving digital connectivity with further funding targeted on education and the tourism sector.

Upgrading transport links between Scotland and England lies at the heart of the deal with £5 million from the UK Government funding a study into extending the Borders Railway to Carlisle.

This is an exciting prospect especially when taken alongside the UK Government’s Union Connectivity Review which is looking at strategic transport connections, including main links across our region to Northern Ireland.

Other major investment is planned at the pioneering former nuclear complex at Chapelcross, near Annan. Working with the Nuclear Decommissioning Authority, the 200-hectare site will be regenerated to create green energy jobs with a combined Borderlands' funding contribution for the project standing at £15.3 million.

The Borderlands Growth Deal is a shining example of how the UK Government works with others to benefit local communities. It adds to the billions the UK Treasury has already invested to support Scotland during the pandemic.

Alongside the many more millions of pounds coming to Scotland through initiatives like our levelling up and shared prosperity funds, this deal will play a key role in putting the coronavirus crisis behind us.

Stranraer can take pride in being a worthy western gateway to the Borderlands.

It was hard to believe that Tuesday marked the one-year anniversary of the first Covid-19 lockdown in the UK and the tragic subsequent premature loss of life, which sadly touched families here in Wigtownshire.

Much has been achieved by so many in combating the virus and ensuring, despite the restrictions, that most priority services have continued with a minimum of disruption.

Whilst there are no certainties with the current pandemic, and a further surge can not be ruled out, the fall in case numbers, locally and nationally is extremely welcome.

I was also encouraged that there was some additional clarity provided by the First Minister last week on the lifting of restrictions in the coming months.

For many smaller businesses, in particular, the long-term uncertainty, and the inability to plan, was almost as damaging as having to close their doors.

Last Friday it was the turn of my wife Ann and I to receive our first vaccine injections and I'm sure everyone attending the NHS Dumfries and Galloway session would like to join me in commending the staff and volunteers for their guidance and efficiency.

Both Ann and I caught coronavirus in the initial phase of the pandemic last year and may have antibodies. Even so, in line with medical advice, we were delighted to receive inoculations, which in our case were manufactured by AstraZenica.

I would urge everyone else receiving their Covid-19 vaccination invitation to take up the offer in order to protect themselves and the wider community.

A75 upgrading would boost local economy

I was delighted that Union Connectivity Review (UCR) leader Sir Peter Hendy ranked the upgrading of the A75 as one of a handful of priority projects in his recently published interim report.

It was always disappointing that the outgoing SNP Scottish Government consistently refused to work with the Review team to allow them to complete their research more speedily, instead of preventing their civil servants from co-operating.

Many of my constituents would welcome additional UK Government investment in our region on such a vital road project that successive nationalist administrations at Holyrood have failed to deliver.

I would like to see strong Conservative representation in the next Scottish Parliament to counter the SNP separatist obsession but, whatever the make-up of the new administration, my hope is that Ministers show greater appreciation of the huge benefits to our region's daily life and economy from any A75 upgrading.

Brexit means that the UK Government is sensibly looking at future strategic transport infrastructure improvements across our nations and regions.

One constituent asked me recently: 'Do you think SNP Ministers would be as obstructive had an A75 investment been proposed by the EU in Brussels'? I'm sure most readers will know my answer!

Pressing case for better A77

Another question constituents, particularly from Wigtownshire, have raised with me in recent weeks is why the the A77 was not included in the interim Union Connectivity Report?

The immediate answer is that the volume of traffic travelling between UK nations, particularly haulage, on the A75 is higher than on the A77.

That said, extra UK Government investment on the A75 would logically free-up resources at the Scottish Government, which is responsible for trunk roads north of the border, but so far has chosen not to make meaningful investment on either the A77 or A75, focusing instead on flagship projects further north.

As recently as last week, I took the opportunity in one of my regular discussions with Sir Peter Hendy to again highlight to him the importance of the A77 as a main arterial route linking Wigtownshire with the Central Belt.

With the Scottish Parliament elections fast approaching, I am happy to endorse the Scottish Conservative and Unionist candidate in Galloway and West Dumfries, Finlay Carson.

He has been a diligent and hard-working MSP with an excellent track record. His roots are in the constituency and he is a dedicated champion for a prosperous Scotland within a strong UK.

Whatever your political preference, I would urge all eligible readers to cast their vote on Thursday May 6 and remind them applications for a postal vote will be accepted at the electoral registration office in Dumfries up to Tuesday April 6.