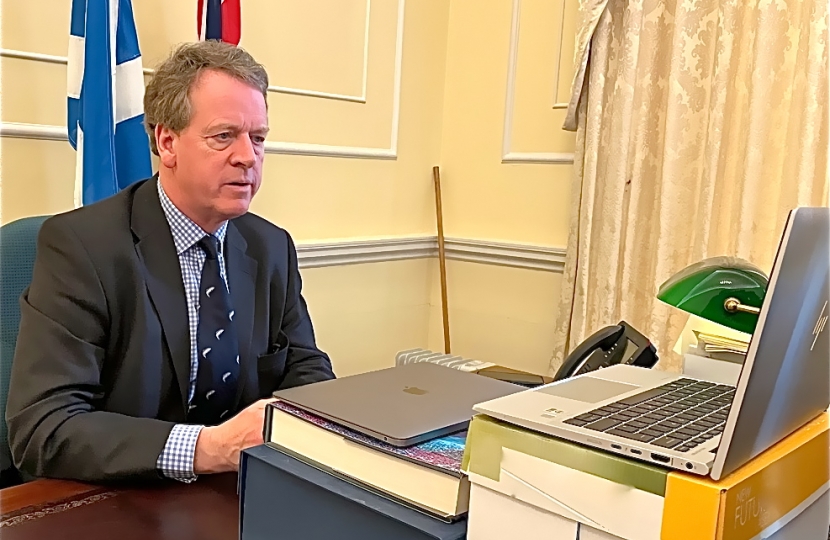 Door open for partnership to improve A75 and A77

I was pleased to receive confirmation from the UK Department of Transport that they are beginning discussions with key stakeholders on Sir Peter Hendy’s Union Connectivity Report recommendations.

These, at this stage virtual meetings, will help shape the UK Government’s response to the wide-ranging independent review which has identified the key local routes, the A75 and A77, as critical strategic transport corridors in need of upgrading.

They are not just vital to Wigtownshire but the wider region and for developing the economies of Scotland, Northern Ireland and the wider British Isles.

As constituency MP I am naturally supportive of upgrading both roads and as I’ve stated before on this page believe more can be achieved by the Scottish Government, which has devolved responsibility for many areas of transport, working positively in partnership with the UK Government.

There was further evidence this month of the importance of the A75 and A77 in the ‘Safer, Greener, Better’ document compiled by a coalition of ferry companies Stena and P and O together with Belfast Harbour.

They highlight what they see as priority projects on both routes and confirm the demand for urgent action from businesses heavily reliant on good transport links in and out of Cairnryan.

This significant new study adds to a weight of evidence backing the upgrading case, not just for safety, economic and travel efficiency but also highlights environmental benefits flagged up by one haulage business, which points out that lorries, on average, emit much less CO2 when travelling on a dual carriageway rather than roads such as the current A75 / A77.

There has been much discussion in the media this week about the feasibility study, commissioned by the UK Department of Transport, that gave a technical and financial assessment of providing a fixed link crossing of the North Channel.

Whilst the estimated costs of designing and building a bridge or tunnel to link Scotland and Northern Ireland are considered too high to be cost-effective in the current financial climate the information gathered will remain a useful resource in years to come.

The potential strategic value of such a fixed crossing to the UK economy has been acknowledged and debated for generations and there has been a number of such studies in the past.

It is estimated from the latest research that around £209 billion, invested over a lengthy design and construction period, would be needed to deliver a tunnel -- the better of the two options but one that is not currently affordable.

But as civil engineering, underwater construction concepts and designs advance, the knowledge gleaned at this time provides a useful benchmark and could prove valuable again if such a project is revisited and is considered feasible in the future.

I’ve heard many moving tributes from constituents to Shaun Niven, chairman of Stranraer Football Club, who sadly died last week at the age of only 52.

His passion for the sport locally and nationally and contribution in wide-ranging roles at Stair Park over the decades have been an inspiration to players and the loyal band of fans.

I add my condolences to the very many received by his family and numerous friends.

Raising a glass to Bard

There were many enthusiasts across Wigtownshire raising a glass on Tuesday to celebrate the life of national bard Robert Burns.

Whilst some traditional Burns night events were curtailed to reduce the risk of Covid spread, a highlight again this year was a digital online version of the Dumfries Big Burns Supper broadcast in the evening via YouTube and Facebook.

A Big Burns Supper Festival proper, with a full live programme of events, is being organised to take place in the summer.

Because of the pandemic I did not attend a Burns Supper this year although through the wonders of the Internet and my laptop was delighted to deliver an official message from the Scotland Office for Burns Night through our social media channels.

As a global event, Burns Night is not only dedicated to the work of the Bard, who spent much of his life in south-west Scotland, but also highlights the work of today’s Scottish writers, musicians and artists who are the envy of the world.

It is always sound advice to encourage householders to install and maintain linked smoke and heat alarms and, where appropriate, carbon monoxide alarms in their homes as they are a proven method of saving lives.

However, despite all the events of the last two years, for the Scottish Government to push ahead with rules forcing householders to install the newer generation of devices by February 1 seems, at the very least, unreasonable.

The looming deadline has caused concern amongst some of my constituents who are worried by the cost, disruption and difficulties in getting the work completed in time.

I appreciate the Scottish Government has given an assurance no-one will face penalties for the time being but by not delaying the implementation of the new regulations Ministers at Holyrood have clearly caused unnecessary stress to householders during a difficult period.

I was pleased that nominations from Dumfries and Galloway constituency were again selected for inclusion in The Queen’s New Year honours list.

Congratulations to Deborah Murdoch of Balmaclellan village shop, who received the British Empire Medal (BEM), for going above and beyond in her work for the local community. Most recently she ensured deliveries were made to vulnerable residents during the pandemic and bad weather. She is also a community council member and stalwart in other groups.

It was good to see a BEM awarded to Stewart Parsons of Palnackie, who has promoted library use nationally, in particularly encouraging their additional role as small music venues.

Long-serving Deputy Lieutenant, the Queen’s representative in the London Borough of Hackney, resulted in Lt. Col. Roderick Morriss being appointed OBE. Although spending much of his life in London, his family roots in south-west Scotland go back generations and he considers Rockcliffe his main home.

I would like to pay tribute to the work of the HM Coastguard volunteers and full-time staff who cover the lengthy coastline around south-west Scotland.

They quietly marked the national 24/7 organisation’s 200th anniversary this month whilst continuing to be ready to swiftly respond to any emergency call-outs after being alerted by their control centre across the North Channel at Belfast.

All trained to a high standard, the various local teams, including in Stranraer, respond to increasing numbers of incidents, often life or death situations.

With an easing in covid infections I’m encouraged that some of the restrictions imposed late last year have been lifted in Scotland and more could follow.

This welcome step towards normality will especially help the entertainment, tourism and sport sectors, parts of which are struggling to rebuild as we emerge from the worst of the pandemic.

We must all remember though that covid has not gone away and it remains important in our everyday lives that we take sensible precautions to limit the spread of the virus when we are out and about.

If you are not fully vaccinated, why not book in at your nearest centre. It will help you, the NHS and the wider community.