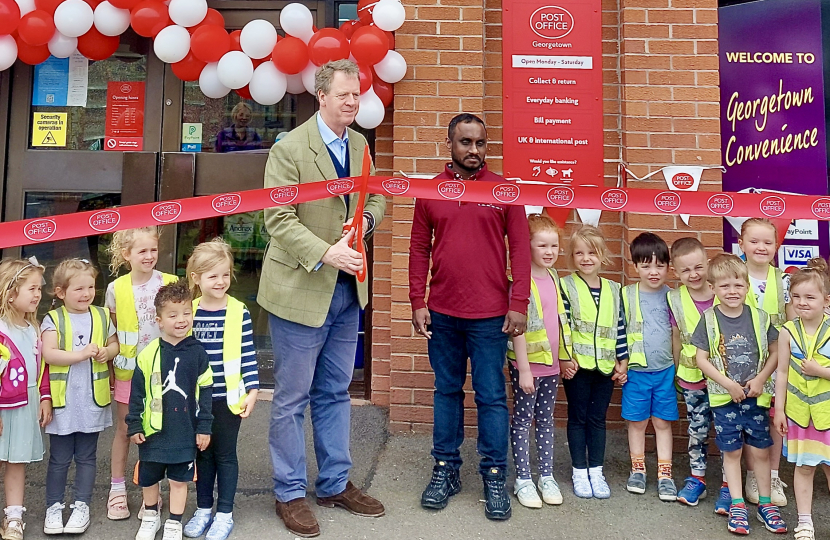 Local MP Alister Jack has praised the team running the new Georgetown Post Office who have restored a full-time service to the area.

The branch has been settling into its new home within the Premier Store in Callside Road and business in the opening weeks has been described as ‘brisk.’

It last month replaced the temporary service, operating from Georgetown Library, which bridged the gap when C.J. Lang stopped hosting the Post Offices in a number of their Scottish SPAR retail outlets last year, including in Gilbrae Road.

He said: “I understand Post Office business has been very brisk in the first few weeks since the opening and it has integrated well with the popular convenience store.

“This has been good news for Georgetown, which is now almost the size of a small town, and it is important to keep as many services locally as possible.

“I would like to congratulate the Premier Store proprietor Kokulabavan Jeyarasa and his team for all their efforts.

“The 57 hours of Post Office counter service they provide each week is not only attracting local customers but also from other parts of Dumfries and beyond. It remains important that this convenient facility continues to be well supported.”

Mr Jeyarasa said:  “We care about the community that we serve. We wanted to help by taking on Georgetown Post Office and local people are really pleased. Business has exceeded our expectations.”